How To Choose The Right Tpu Film Extrusion Line

If you are looking for tpu film extrusion line, be sure to choose the right line for your business. There are many factors to consider, such as the size of your operation and the types of products you plan to produce. Learn more about your options and find the best machine for your needs.

1.1 What is tpu film extrusion line

Machines for producing TPU film. TPU film is a plastic film used in a variety of applications including packaging, labeling and lamination. TPU film is known for its high strength, durability, and flexibility.

1.2 What are the advantages

The TPU film extrusion line is a machine used to produce TPU film. These lines have many benefits, including:

1.3 What is the extrusion process

The high-efficiency tpu film extrusion line process first heats the TPU resin to a liquid state. The resin is then pumped through a die, which shapes the resin into a film. The film is then cooled and cut to size.

The production line consists of four main components: extruder, die, pulling unit, and cutter. The extruder melts the TPU pellets into a liquid, which is then forced through a die to form a film. The pulling device pulls the film out of the mold, and the cutting machine cuts it to the required width.

What are the benefits of the production line

There are many benefits to using a high-efficiency TPU film extrusion line. Some benefits include:

There are many benefits to using a TPU film extrusion line. One of the main benefits is that you can produce high-quality TPU film with this type of production line. In addition, you can use film extrusion lines to produce films with various properties according to your needs. This type of thread is also very versatile, meaning it can be used to make a variety of different types. A cost-effective way to produce high-quality TPU films.

How to choose the right production line

When choosing a TPU film extrusion line for your business, there are several factors to consider. The most important consideration is the type of film you are producing. Different films require different extrusion lines.

You also need to consider the size of your business. If you are a small business, you probably don’t need a large extrusion line. The size and capacity of the extrusion line you choose will depend on the quantity of TPU film you plan to produce.

Finally, you need to consider your budget, which can be expensive, so you need to find a line that fits your budget. There are a variety of film extrusion lines on the market, so you should be able to find one that meets your needs.

There are a few things to consider when choosing a tpu film extrusion line for your business. The first thing to consider is the type of TPU you want to extrude. There are two types of TPU: thermoplastic polyurethane (TPU) and polyether block amide (PEBA). TPU is a harder material, while PEBA is more flexible.

What are the main features

4.1 What are the main components

It usually consists of four main components: feeder, die head, pulling device, and winder. The feeder is responsible for feeding the TPU resin pellets into the extruder, while the die is used to shape the molten TPU into a film. The pulling device is used to pull the film from the die head, and the winder is used to wind the film on the reel.

4.2 What are the main advantages

The line has many main features that distinguish it from other types of film extrusion lines. These features include a modular design for easy configuration and operation, fast start-up times, and extensive processing capabilities. Additionally, extrusion lines offer many advantages, including high-quality products, low production costs, and fast turnaround times.

4.3 What are the main limitations

These films are used in a variety of industries including automotive, medical and industrial. The line can produce films of various thicknesses, depending on customer needs. Films can also be printed or coated with various materials to meet customer specific needs. 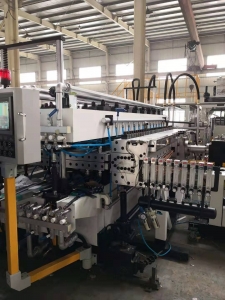 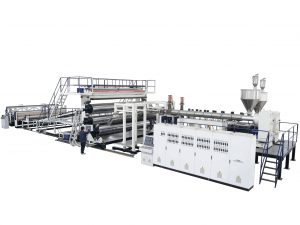 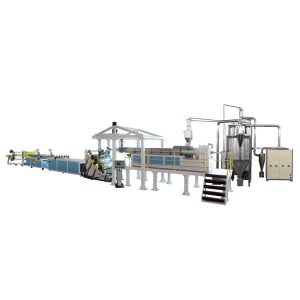