The high-performance tpu film extrusion line is used to produce flexible and durable films for a wide range of applications, such as in the automotive, medical, and industrial sectors. These films are known for their high strength, flexibility, and resistance to chemicals, oils, and UV radiation.

An easy-to-use tpu film extrusion line usually includes several key components such as extruder, die head, and chill roll. The extruder is responsible for heating and melting the TPU pellets, which are then passed through a die to form a film. The film is then cooled through a series of rollers, which help set the shape and dimensions of the film.

One of the main advantages of an easy-to-use film extrusion line is the ability to produce high-quality film of consistent thickness and width. This is achieved through the use of precision extrusion and cooling techniques, which help ensure consistent film quality and no defects.

Another important aspect of an easy-to-use TPU film extrusion line is its ability to be easily operated and maintained. Many modern extrusion lines are equipped with user-friendly control systems and interfaces that allow operators to easily adjust and monitor various parameters of the production process. In addition, many lines are designed with easily accessible components, which allows maintenance personnel to easily maintain and repair lines when needed.

Overall, the easy-to-use TPU film extrusion line is an invaluable tool for companies that need to produce high-quality, durable films for a variety of applications. Capable of producing consistent and reliable films, easy to operate and maintain, and capable of a wide range of applications, a film extrusion line is a versatile and efficient solution for any company looking to remain competitive in its industry.

In addition, the TPU film extrusion line can also be used to produce multi-layer films. This is achieved by using multiple extruders and dies, which enables manufacturers to produce films with different properties and functions. For example, a multi-layer TPU film can have a hard, wear-resistant layer on one side and a soft, flexible layer on the other.

In addition, the TPU film extrusion line is also known for its high efficiency and energy saving. They are usually equipped with advanced temperature control systems and energy-saving motors, which help to reduce energy consumption and lower production costs.

In conclusion, TPU film extrusion lines are versatile and efficient solutions for producing high-quality, durable films. They can produce films with different properties and functions, such as flexibility, transparency, and UV resistance. They can also produce multi-layer films and are equipped with advanced temperature control systems and energy-saving motors that help reduce production costs. Their ease of use and maintenance makes them an invaluable tool for companies that need to produce thin films for a variety of applications.

Another important aspect of a TPU film extrusion line is the ability to produce films of various thicknesses. This is achieved by adjusting the width and shape of the die, which controls the flow of molten TPU through the die and determines the final thickness of the film. This thickness flexibility enables manufacturers to produce films that meet the specific requirements of different applications.

In addition, film extrusion lines offer various post-processing options such as embossing, printing, and lamination. These options allow manufacturers to create films with different textures, patterns, and designs. They can also be used to add additional functionality to films, such as water resistance and antimicrobial properties.

Another advantage is the ability to produce films of different widths. This is achieved by adjusting the width of the dies and rollers and can be done quickly and easily. This width flexibility enables manufacturers to produce films that meet specific width requirements for different applications.

Also known for its durability and longevity. They are usually made of high-quality materials and components that can withstand the wear and tear of the extrusion process. This means they require minimal maintenance and repairs, reducing downtime and increasing productivity.

Another important aspect of tpu film extrusion lines is their environmental impact. TPU films are considered a more sustainable alternative to traditional plastic films because they are more flexible, durable, and easier to recycle. The production line is also designed to minimize waste and energy consumption during production, which helps reduce its environmental impact.

Another way TPU film extrusion lines are environmentally friendly is their ability to reduce the use of solvents in the production process. Solvents are often used in the production of traditional plastic films, which have a negative impact on the environment. However, the production line uses a dry process that requires no solvents, reducing pollution and waste.

All in all the tpu film extrusion line is a versatile and efficient solution for producing high quality, durable films that can be used in a wide range of applications. Available in a wide range of thickness options, post-processing options, width options, color, and pattern options, they are known for their durability, longevity, energy savings and minimal environmental impact, and cost-effectiveness. They are easy to use and maintain, making them an invaluable tool for companies that need to produce films for a wide range of applications, including packaging, automotive, medical, and industrial industries. 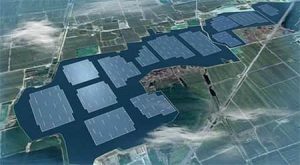 Analysis of the whole industry chain of EVA/POE

What is JWELL blow molding machine?