The function of the antistatic agent is to reduce the surface resistance of the polymer product and eliminate the electrostatic hazard that may be caused by the accumulation of static electricity. According to the different ways of use, antistatic agents can be divided into two types: internal addition type and coating type.

Internally added antistatic agent is added or blended into the plastic formula, and after molding, it migrates from the interior of the product to the surface or forms a conductive network, thereby reducing the surface resistance and discharging the charge.

Coated antistatic agents are attached to the surface of plastic products by coating or wetting, thereby absorbing moisture in the environment and forming an electrolyte layer that can discharge charges.

As a manufacturer of plastic extruders, China Jwell uses antifungal agents, also known as microbial inhibitors, which are stabilizers that inhibit the growth of microorganisms such as mold and prevent polymer resins from being eroded and degraded by microorganisms. Most polymer materials are not sensitive to mold, but their products are susceptible to mold due to the addition of plasticizers, lubricants, fatty acid soaps and other substances that can breed mold during processing.

Optical brighteners are fluorescent dyes, or white dyes, which are also complex organic compounds. Its characteristic is that it can excite incident light to produce fluorescence, so that the dyed material obtains a sparkling effect similar to fluorite, and the material seen by the naked eye is very white.

The filling and reinforcement used by china extruder machine manufacturer is an important way to improve the physical and mechanical properties of plastic products and reduce the cost of compounding. The reinforcing materials involved in the plastics industry generally include fibrous materials such as glass fibers, carbon fibers, and metal whiskers. Filler is a bulk material with low compounding cost, including calcium carbonate, talc, terracotta, mica powder, silica, fly ash, red mud and natural minerals such as wood flour and cellulose, synthetic inorganic and industrial by-products.

In fact, it can be hard to tell the difference between reinforcing and filler, since almost all fillers have a reinforcing effect. Due to the large amount of fillers and reinforcing agents used in plastics, some of them have become an industry system of their own, which is not traditionally discussed in the category of processing aids.

It should be noted that the modification effect of nano-filled reinforcing materials widely studied by china extruder machine manufacturer on plastics has far exceeded the meaning of filling and reinforcing, and their application will bring a new revolution to the plastics industry.

Lubricant is a processing modifier that is mixed in polymer resin to reduce the friction between resin particles, resin melt and processing equipment and intermolecular friction in resin melt, and improve its fluidity and mold release during molding. , It is mostly used in the processing and molding process of thermoplastics, including hydrocarbons (such as polyethylene wax, paraffin, etc.), fatty acids, fatty alcohols, fatty acid soaps, fatty acid esters and fatty amides.

What Factors Will PVC Wood-Plastic Extrusion Be Affected By? 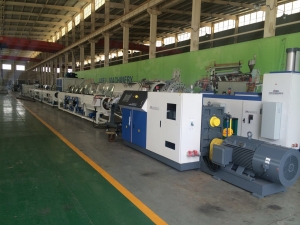 Common Problems And Solutions In The Process Of PE Pipe Extrusion