PE breathable film is a new material that is rapidly developing in the world. It is called a breathable film. It is widely used in various fields because of its breathable and impermeable characteristics.

1. The structure of PE breathable membrane

The main component of PE breathable membrane is polyethylene, which is a polymer material synthesized from polyethylene. In polyethylene production, a small amount of 4-carbon or 8-carbon a-olefin is added as a comonomer. However, because the amount of a-olefin used is minimal, many of the polyethylene characteristics are still maintained.

1. It can permeate gas but not water so that it can be used as a waterproof material with moisture resistance;

2. It can appropriately improve the air convection in the user’s environment, which is beneficial to skin breathing;

3. Due to its raw materials’ characteristics, PE breathable membrane is a new, environmentally friendly material and does not pollute the environment.

From the perspective of processing technology, there are two main processing methods for breathable membranes: the flat film casting method and the other is the blown film method, of which the casting method is more used.

The main process flow of the casting method is as follows:

During the stretching process, when the binding force between the porogen caco3 particles and the surrounding PE polymer is less than the PE polymer’s deformation force caused by stretching, the polymer will separate along the edges of the caco3, resulting in some tiny particles. The cavities can not allow liquid molecules to pass through, but only gaseous molecules, so that the stretched film has the function of waterproof and breathable.

The cavity size can be adjusted depending on the process conditions such as the size, shape, stretching method, and stretching ratio of the caco3 particles.

4. The problems and countermeasures frequently encountered in the production process of PE breathable film.

1 The compound is not strong

The composite strength of PE breathable film is very low or zero, which can not meet customers’ requirements at all, resulting in product scrapping. Due to the particularity of the PE breathable film production process, low surface tension, high slip agent content, and surface contamination may lead to weak composites.

Under normal circumstances, the PE breathable film’s surface tension for dry compounding must be above 38 dyn/cm before it can be used.

The practice has proved that if the surface tension value of the PE breathable membrane is lower than 38dyn/cm, it may cause the phenomenon of low composite strength. Below 36dyn/cm, the combined power will be extremely low or zero.

Here are several sets of data for reference:

The surface tension value of the PE breathable membrane is tremendous when it is just produced, but as time goes by, the surface tension value gradually decreases. Generally, the PE breathable membrane can be stored for 3-6 months, but it can be stored for 3-6 months in summer. The storage period in the humid season is best not to exceed two months.

Therefore, the PE breathable film placement should generally not exceed three months, especially in the rainy season. More attention should be paid to the ventilation and ventilation of the storage if the storage time is too long for some reason, when re-use, in addition to the roll-by-roll inspection, it is necessary to comprehensively consider whether to continue using the composite product according to the purpose of the mixed product, to avoid loss.

These additives are not static after film formation or compounding, especially slip agents, which generally use erucamide or oleamide.

There are two reasons for the decrease in composite strength due to slip agents:

②The initial composite adhesion is acceptable, but as the curing time increases, the combined strength becomes lower and lower, and a white powdery substance appears between the two layers.

This is because high-slip PE raw materials are used in the production of PE breathable film. Due to the slip agent’s high content in the movie, the movement of slip agent molecules in the film intensifies during the curing process at high temperatures (40-50℃). A large number of slip agent molecules migrate to both sides of the film. As time increases, the amount of migration to the surface gradually increases. Its migration destroys the physical bonding process between the adhesive and PE molecules and will form. The weak bond force is destroyed. The longer the time, the stronger the destructive power and the lower the composite strength.

In this case, increasing the curing temperature is generally adopted to accelerate the cross-linking speed of the adhesive so that the reaction speed exceeds the migration speed of the slip agent to compensate for the excessive slip agent in the PE breathable film. Negative impact.

PE breathable membranes are generally not polluted during the production process, but one of them is easily overlooked: the pollution of dyne fluid.

Many PE breathable membrane manufacturers use self-prepared dyne solutions to test the surface tension of the membrane. The dyne liquid is generally a mixture of ethylene glycol monoethyl ether, a colorless and transparent liquid. If it is accidentally contaminated with the guide roller due to its slow volatilization speed, the film will be degraded when passing through the guide roller. The dyne solution invades the PE breathable membrane’s surface and is tightly combined with the PE molecules. It does not cross-link with the binder molecules after compounding, resulting in local composite strength of zero. This situation is complicated to find in the pre-inspection.

This phenomenon is straightforward to occur on PE milky white film; generally, the milky white film is added with a certain amount of white masterbatch: concentrated titanium dioxide. Due to the different quality of the color masterbatch, the particle size and hardness of the contained titanium dioxide are different, resulting in various quality of the milky white film produced after compounding and different surface brightness. If the milky white film’s surface feels rough and has pitting from the side, most of the products compounded with such a film will have white spots. The usual solutions to this problem are as follows: One is to increase the adhesive amount. The second is to reprint a layer of white ink. No matter which method is adopted, the cost will be increased, so the PE film must be strictly inspected before use.

This phenomenon has occurred in many manufacturers. The automatic packaging machine for the composite product does not run smoothly, or the bag made is difficult to open.

Dry compounding generally uses two-component reactive adhesives, which must cure at a high temperature after compounding to achieve the highest compound strength. The slip agent in the PE breathable film will change due to the change of curing temperature. At a specific temperature, the slip agent will undergo chemical changes and lose its slip effect. The higher the weather, the more significant the difference. The greater the loss, the final product will become astringent and cannot be used.

Therefore, the curing chamber’s temperature must be strictly controlled at about 40℃ and cannot be increased arbitrarily. Also, according to the different uses of the product, choose other ingredients to avoid the product’s astringency due to improper selection of resin grades.

After the compound enters the last processor enters the customer’s hands, sometimes the local heat-sealing temperature is too high, the heat-sealing is not right, etc., which cannot be saved in severe cases. The reasons for this result include corona breakdown, high slip agent content, and excessive addition of recycled materials.

When the PE breathable film passes through the high-voltage discharge roller during the production process, it may cause a partial breakdown of the film due to various reasons. This phenomenon is often a longitudinal strip, and the position is generally fixed. The surface tension value is usually very high. Because the breakdown hot cover forms a substance with polar groups like the composite surface, this substance does not have heat sealability. Therefore, it will use in bag making or automatic packaging. Poor partial heat sealing occurred. The PE breathable membrane adds a compound surface tension value test item when entering the factory for inspection to avoid this phenomenon.

This may happen if an expired PE breathable membrane is used. Therefore, it is necessary to select the appropriate resin grades according to customers’ specific requirements and try not to use dead films for high-slip products. After this phenomenon occurs, it is recommended to use a solvent to wipe the hot cover repeatedly, and the effect will improve.

Because of its soft and comfortable physical and mechanical properties, PE breathable membrane has excellent tensile and elongation properties. 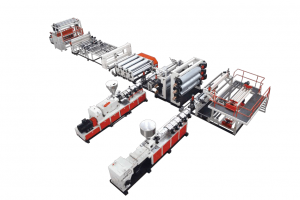 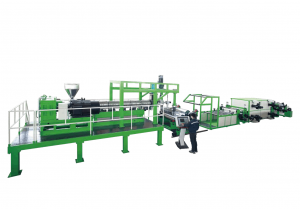 What to know about China pp board extrusion line 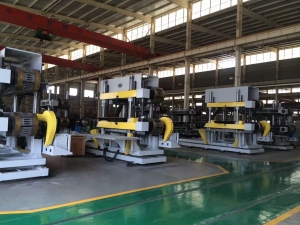 The future of China plastic extruder